Energy efficiency improvement of an existing building in Via Navetta, Parma

General Plan / Floor Plan. The project redesigns the internal and external distribution by introducing new elements and enhancing the existing. The accessibility to the estate is modified by the shifting of the carriage and pedestrian gates system and with new geometries. Cars entrance and exit is facilitated by providing them increased safety when entering the street. The realization of a large garage on the bottom of the estate clears the outside surfaces from the presence of cars. The mezzanine floor of the house, which consists of the living area and is devoted to ​​hospitality, is linked to the back garden, more protected and livable, through the construction of a large covered terrace. The area below the new terrace becomes a container for garden equipment. The new exterior tree planting is enhanced by a secular olive tree from the Agrigento area in Sicily. Existing tree planting has been saved by preserving a beautiful magnolia on the front of the road and a tall bay tree on the back.

The basement is a service floor and it houses the cellar and the heating system central unit while the upper floors house the sleeping area, a writing studio and the guest bedroom.

Despite a radical transformation of the building (it dates back to the early 50’s), the original static design was maintained and fully respected. In order to avoid altering the dimensions and demolishing the existing staircase, radiant heating panels have been installed on the ceiling (and they have been wall mounted in the staircase). All the new systems backbones and the centralized controlled mechanical ventilation ducts have made to run on axis with the central bearing wall and then hidden by plasterboard ribs. 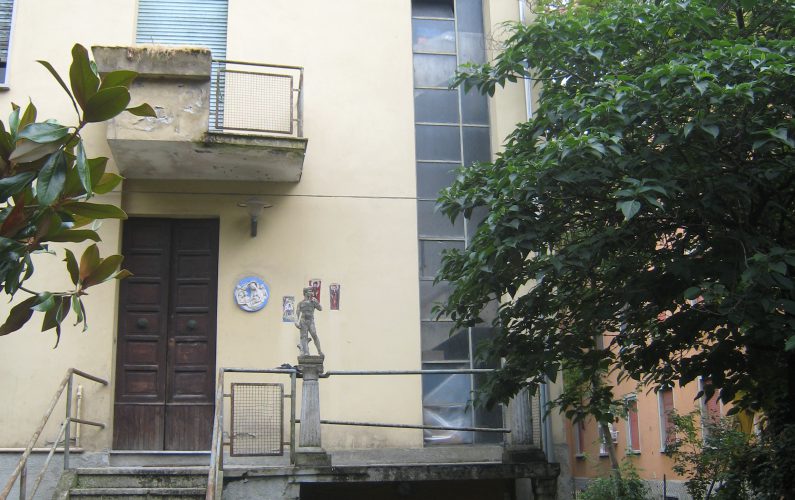 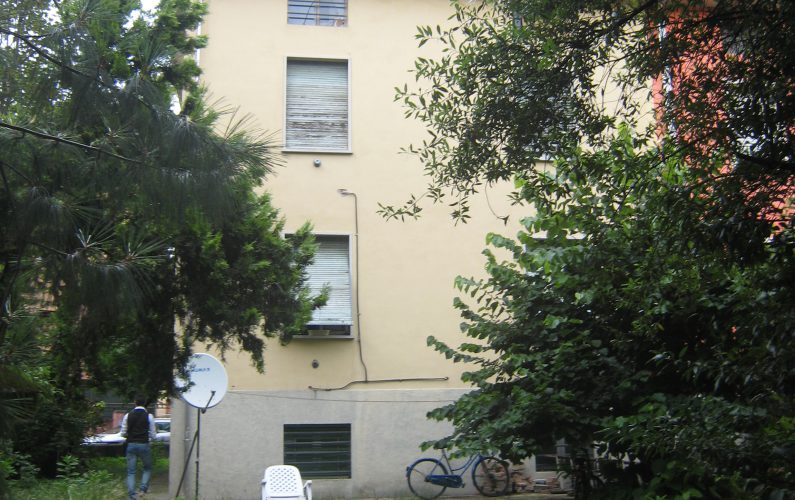 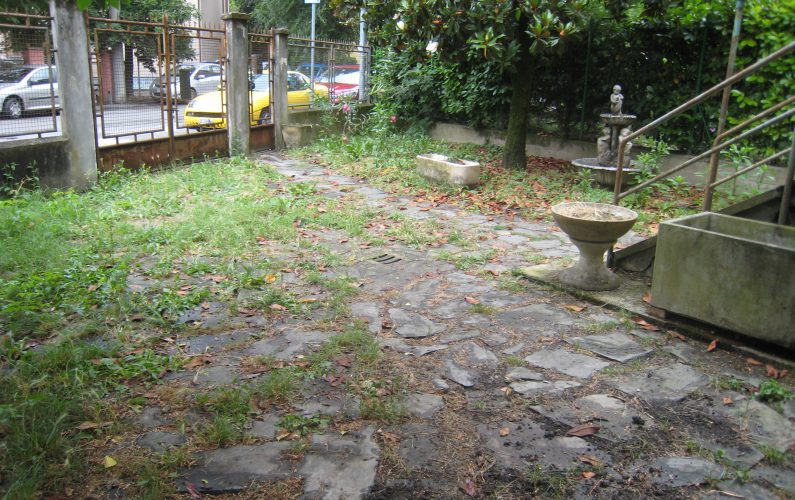 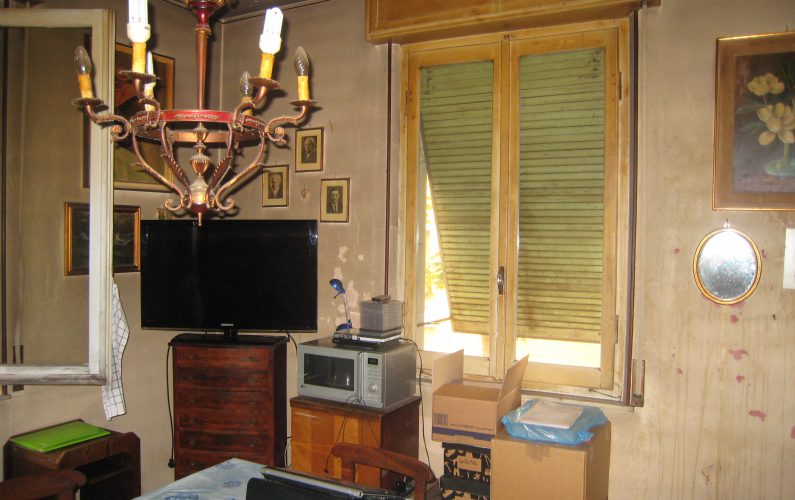 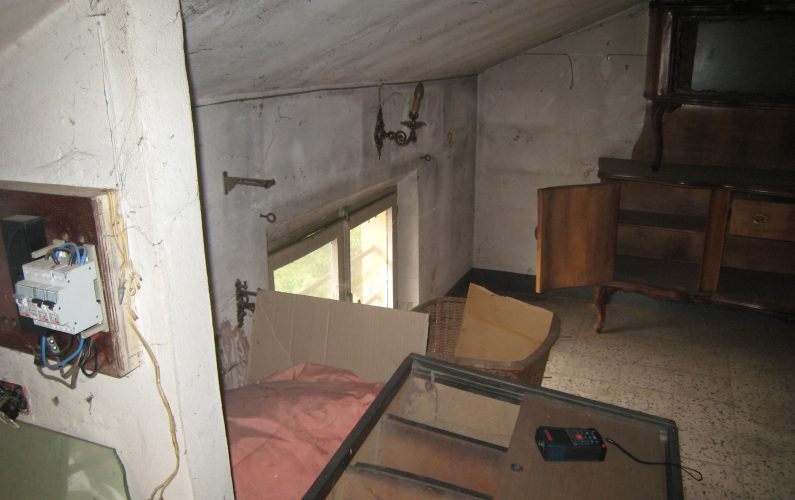 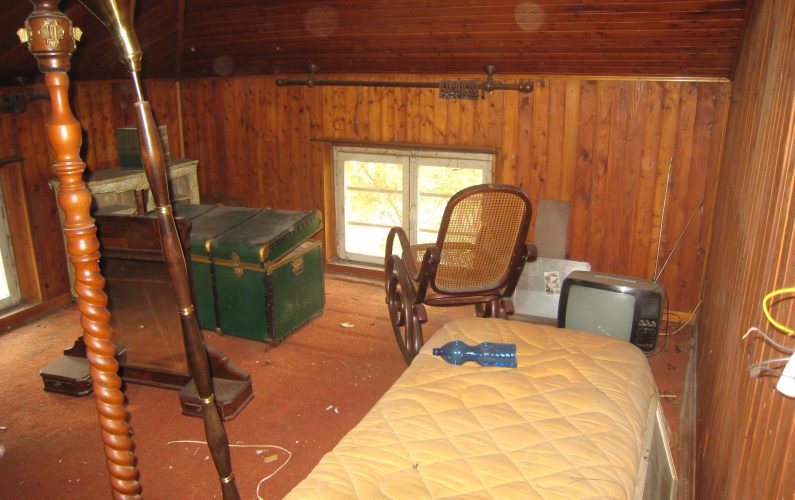 01/06. The existing building – the obsolescence of the interiors and the dilapidated facades 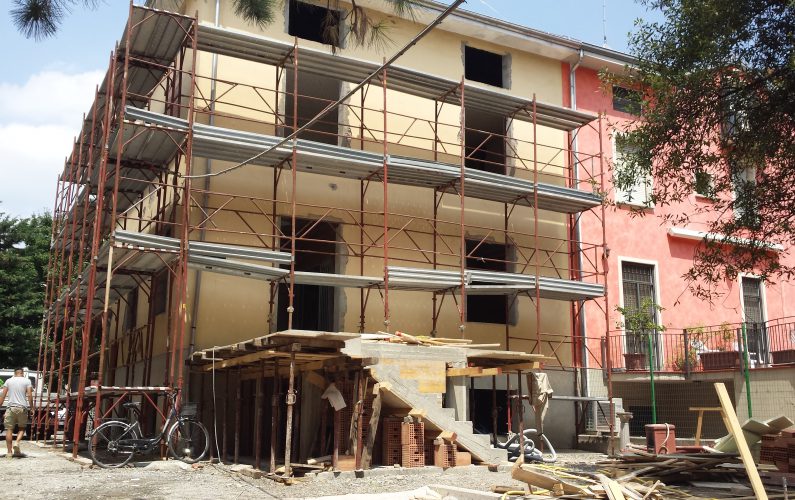 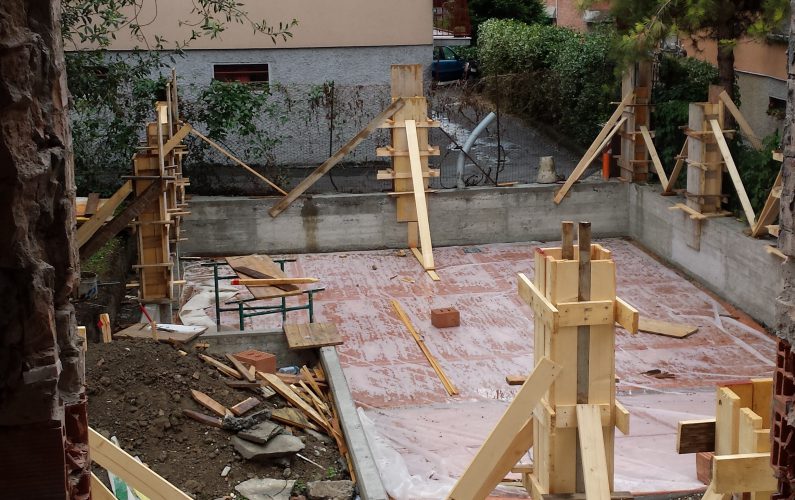 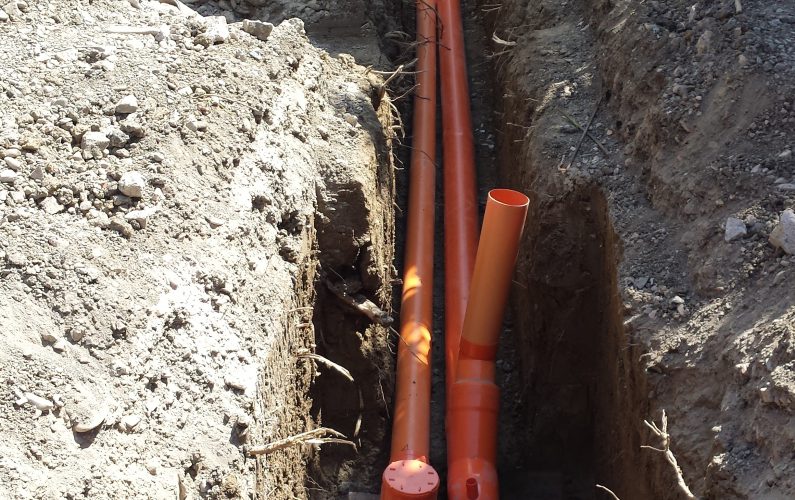 07 / 09. The first activities: the construction of the new terrace at the back, the foundations of the garage, and the new white waters and black waters drains.

10. One of our BBQs: the relaxed and friendly relationship with the workers is crucial to works success. 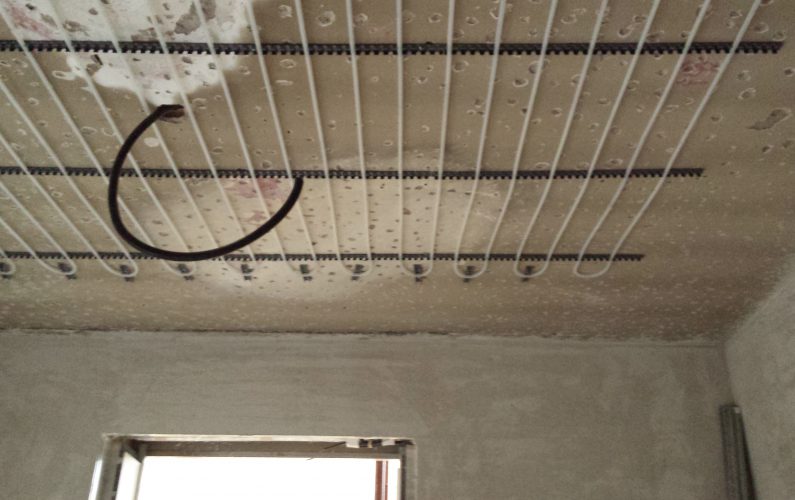 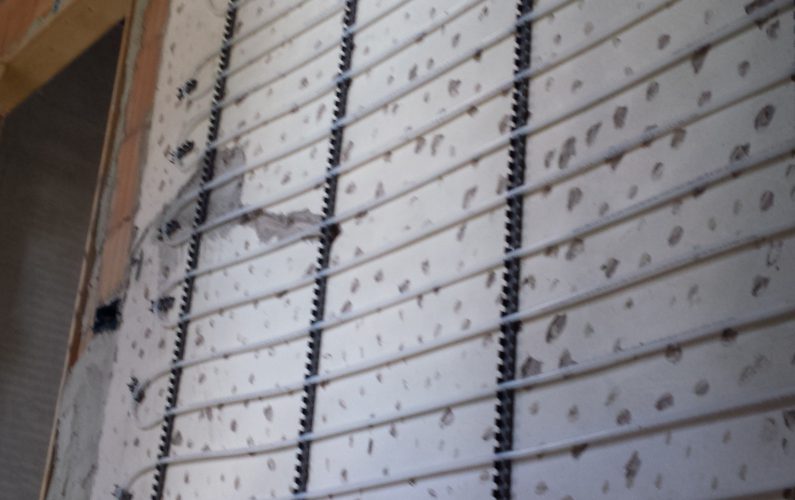 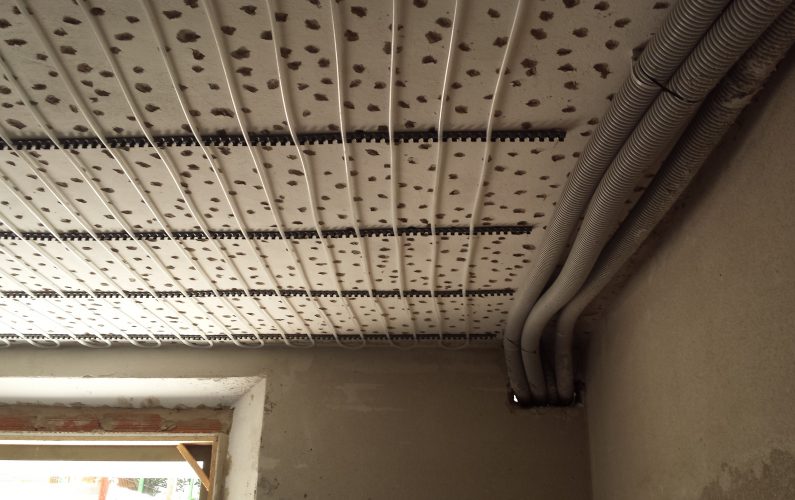 11 / 13. Installation of the radiant heating panels on the ceiling and on the walls. The piping of the system is subsequently covered with an ordinary thickness fibre-reinforced plaster. In renovations, this technique enables not to modify the existing floor dimensions, especially in the presence of stairs. As far as yield is concerned, contrary to what is commonly thought, radiant ceiling performance is extremely high and has virtually no interference.

15/16. The new high-performance triple glass pvc doors, with reinforced steel reinforcement. The old windows were removed from the walls and, in order to avoid any type of thermal bridging, a new pre-insulated monobloc was installed, with motorized roller shutter enclosure.

17. Solar panels and photovoltaic cells on the south pitch of the roof

18. The motorized velux skylight with armored shutter. Note the thickness of the cover where a 20 cm thick rock wool insulation has been introduced and a higher ventilation chamber for increased efficiency both in summer and winter. 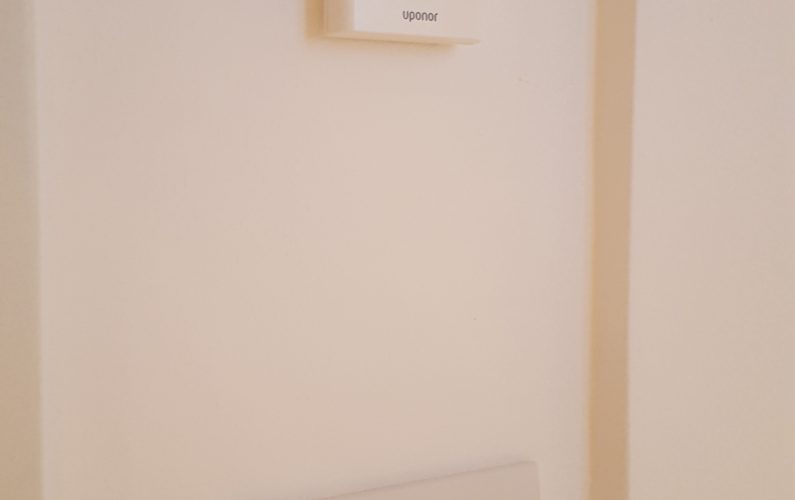 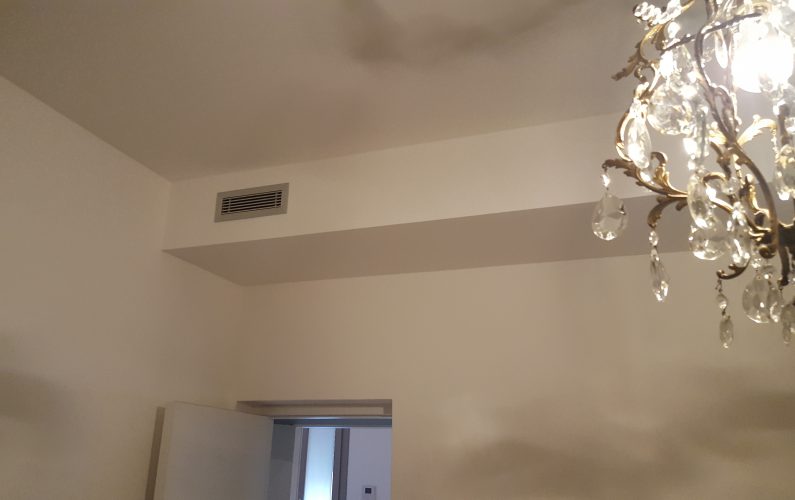 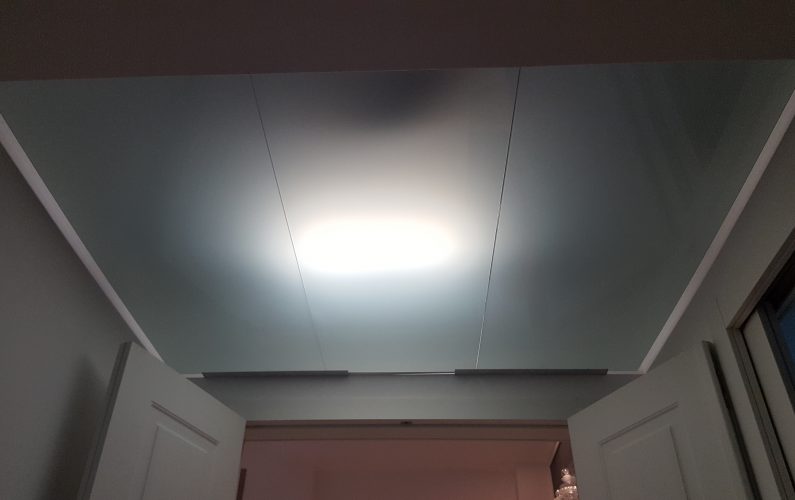 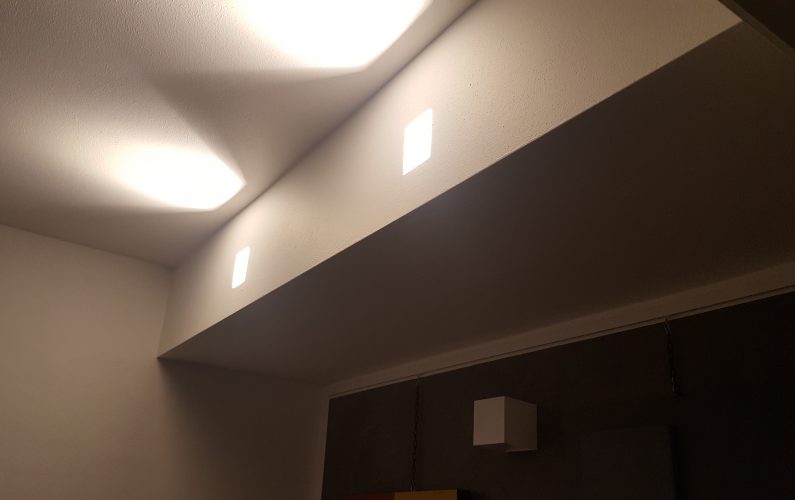 19 / 22. The visible elements of the entire air conditioning and heating system: the aluminum grids embedded in the plasterboard ribs and the thermostats placed in each room to minimize adjustments and limit consumption. The central hallways, present on each floor, are applied a false ceiling made by removable, led backlit glass panels therefore hiding the main collectors and plenums. All plasterboards boxes house system components and lines and they are completed with recessed spotlights installation. 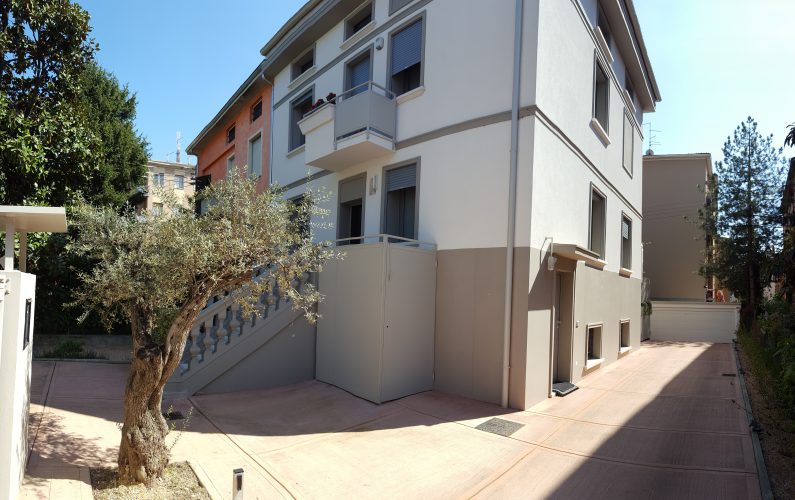 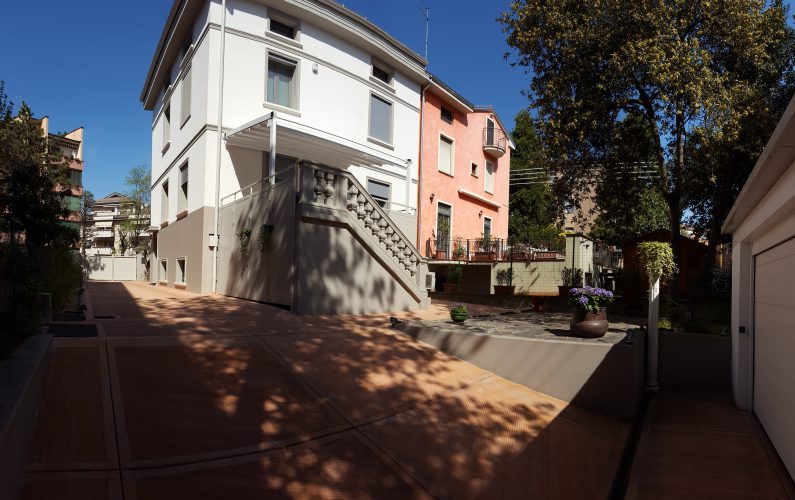 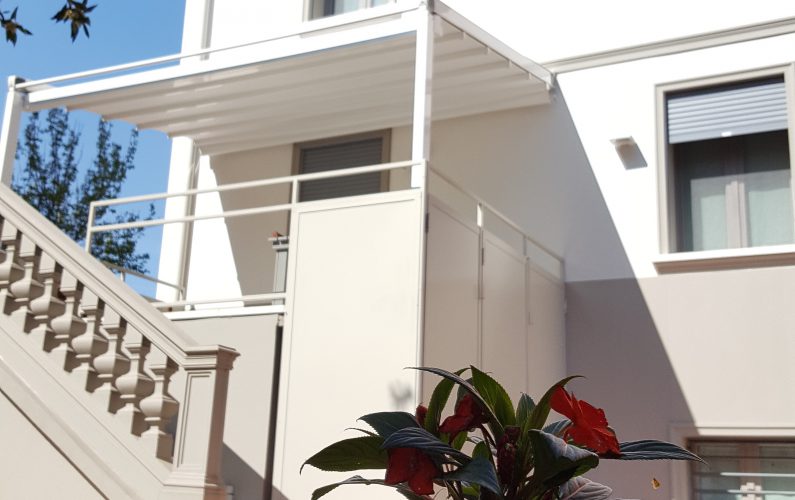 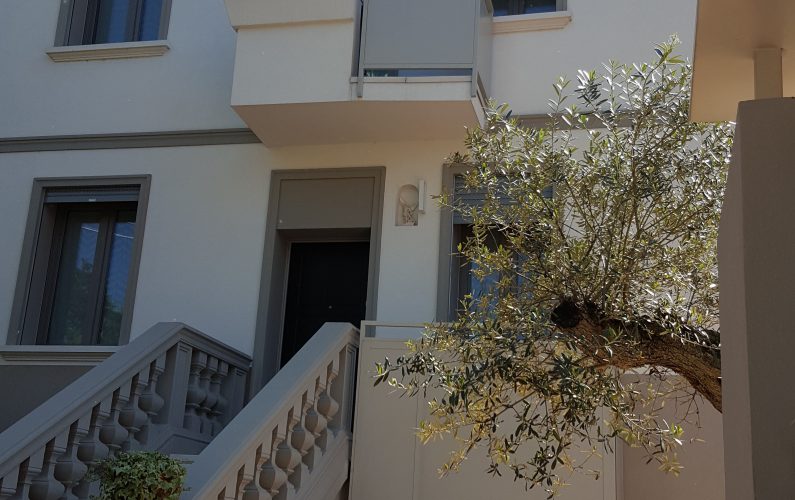 23 / 26. Exterior views of finished works. The perimeter base, 240 cm high, is made of a Kerlite coating made of a whole vertical slab, it is used to protect the lower part of the house. Kerlite has also been extensively used as a coating and flooring material inside the home.

The edges of the windows and the string-courses have an aesthetic but also a technical function, since they house the surfaces of the ETICS finishing coat by thus avoiding unpleasant overlaps.

28 / 29. The dramatic flooding of the Baganza river on October 13, 2014 involving the whole area. The building, basically completed and just waiting for the owners to move in, is also flooded as the whole neighborhood. The following picture shows the basement (which had been completely flooded with water and mud), after being cleaned and washed simply by means of a high-pressure cleaner and after painting the walls. The dehumidifying intervention applied in compliance with Torggler cycle certified standards has exceeded any expectations during the final testing, and after only a few days there is no trace of moisture left.

Redesign of the internal and external distribution

What are you waiting for? Contact us for a complete quote of your new wooden house.